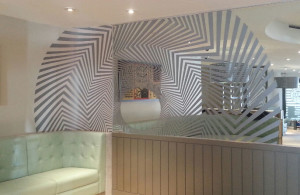 The graphics specialists at Oasis Graphics Co., in Berkshire, UK, were commissioned to assist in the redesign of the Pizza Express restaurant chain back in 2012. Their design/architectural clients were interested in their production and installation capabilities for the restaurants’ bespoke graphics in four locations.

Oasis was responsible for specifying which products to use for the interior graphics that would withstand the bustling commercial environment. Each of the restaurant’s focus on the graphical theme of “honoring the fictional and factual connections with local famous Britons.” 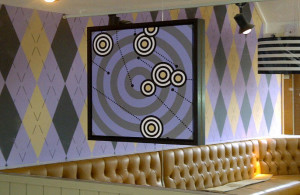 One of the four themed Pizza Express’s was inspired by H.G. Well’s ‘The Time Machine,’ which has a prominence in Banstead, the pizza shop’s location. Working closely with the designers and architects involved in the project, the team chose a book passage from which the graphics were inspired. According to Oasis, “Our studio helped to design the bespoke wall coverings, window graphics and an attention grabbing clock design created from a base of digitally printed wallpaper, with individual parts of the movement made from optically clear printed vinyl applied to mirror DIBOND and raised off the main surface to create a three dimensional centerpiece.” 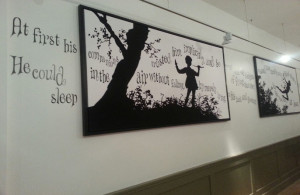 Each of the restaurants feature digitally printed wallpaper that is inspired by the town in which it resides. The Sunningdale Pizza Express location is golf-inspired, as the city is seen as the “English epicenter of golf,” utilizing Argyle-themed wallpaper and motifs of flags, holes and circular striped green. For the Bayswater location the designers chose a Peter Pan theme, whose author lived and wrote the story on Bayswater Road. The final location, Harrow, was inspired by the town’s most famous resident, W. Heath Harrow, a tremendous illustrator with a fascination of machinery. 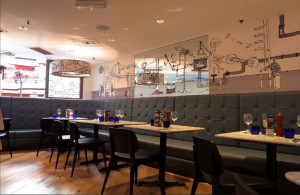 Each of the restaurant’s designs are unique, transforming the patrons into a symbolic world inspired by his or her own town. Oasis further states, “All four restaurants reopened according to schedule and were completely transformed by the innovative constructions of DIBOND, as well as the digitally printed wallpaper, optically clear films, profile cut vinyls and other artworks that we produced and installed.”