The Effects of Static Electricity on Digitally Printed Plastic Materials 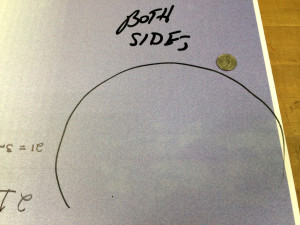 When an ink droplet leaves the print head of a digital printer, it acquires a positive electrical charge, which allows it to be directed precisely to the point where it needs to be in order to achieve the desired image. If the material that is being printed has residual static charges on its surface, it may lead to detrimental effects on the finished print. This is due to the simple fact that materials with opposite charges tend to attract each other.

Static electricity not eliminated from plastic material prior to printing may cause digital print defects depending on the type of image being printed. These defects are typically more prevalent in colors having low ink saturation and include pastels, light grays, and flesh tones. The defects are sometimes described as blotches, swirls, inconsistencies or spots and will occur on both sides of the material. They are often blamed by the end-user as some type of contamination that is on the sheet. The end-user may then request replacement of material and additional costs for ink costs and lost production time. 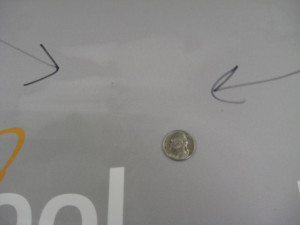 The effects of static electricity are typically worse in the wintertime and in areas of the country that have lower amounts of rainfall. The use of HVAC heating units in cold weather can also further lower the relative humidity levels indoors to levels as low as 15-20%. Humidification equipment can be used in the print area or installed to run in conjunction with HVAC units to bring humidity levels to the necessary levels to eliminate issues with static electricity and plastics.

Plastic materials are insulators and do not conduct electricity very well. Any static electricity that is generated during the production process or by simply handling, un-stacking, or wiping the material cannot be eliminated by simple grounding methods. If the end-user is not able to control relative humidity levels in his print area then he may need to investigate the use of ionization equipment to neutralize the charges in plastic materials before printing. This type of equipment produces a source for negative and positive ions that also do an effective job of removing static electricity from plastics. These units can either be attached to the printer or used to generate a source of ions that can be blown across the sheet once it is on the print table and prior to it being printed. 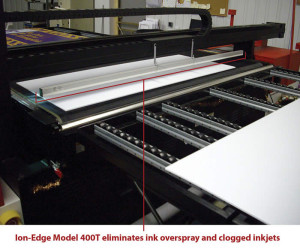 The photographs above show examples of print defects caused by static electricity on plastic material. The following is an example of ionization equipment that can be used to dissipate static electricity if controlling relative humidity in the printer area is not an option.

For further information on the effects of static electricity when printing to plastic materials please feel free to contact the Technical Services department of 3A Composites by calling 800-626-3365 or by sending an e-mail to gary.scott@3acomposites.com.